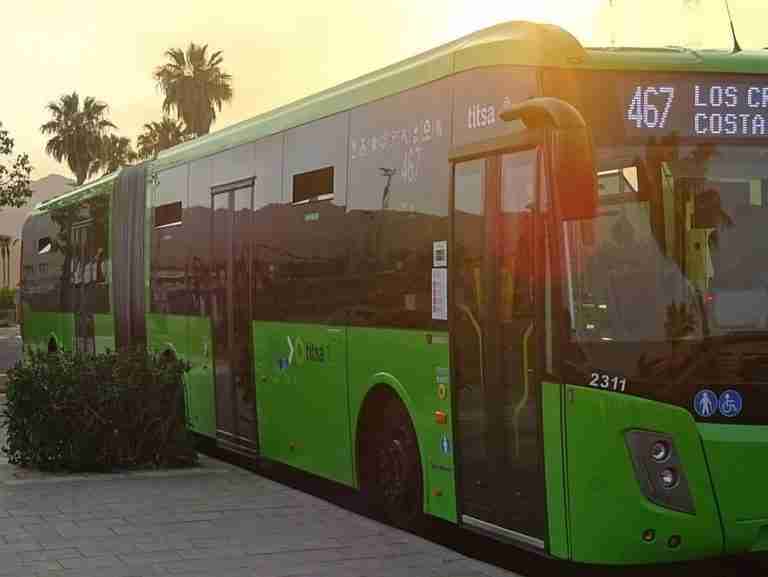 Public transport in Tenerife is well organized. The green TITSA buses, also known locally as Guaguas (pronounced: WaWaas) are widely represented on the island. It is an excellent way to get from 'A to B'.

Click (click here) for the link to the bus company's website (Spanish and English). Under the heading Fares and Discounts, you will find details about the bus pass and a QR code for the bus pass app. And, of course, all the bus timetables plus last minute information.

The buses are comfortable and air-conditioned. In addition, the buses on the longer routes have free WiFi and handy USB charging points.

It is also relatively cheap and fast to travel by bus. For example, from Costa Adeje to the airport of Tenerife South it takes only 40 minutes by TITSA bus, and costs only €3.00 (£2.49) per person if you pay with the bus card.

This bus ticket (Tarjeta TenMás) can be bought at many selling points, such as a newspaper kiosk, mini market and the major bus stations.

All selling points are listed on the bus company's website. It is also possible to load the cards there. Please note: it can sometimes take up to 8 hours for the charged balance to be credited to the card.

It is possible to travel with several people on 1 card, but you must indicate this to the driver before you scan the card when boarding. And, of course, there must be enough balance on the card.

When boarding, you do not have to tell the driver to which stop you want to drive, it is sufficient to pass the card past the scanner (next to the driver). When you get off you have to check out again (scanner at the exit). You will immediately see the remaining balance.

The Ten+ card is also valid for the tram in the capital Santa Cruz de Tenerife.

The bus pass app can also be used as a bus card and can be recharged online.

That seems useful, but beware: to be able to install the app, there are several restrictions:

My advice: if it's only for use during your holidays, just buy a Ten+ card when you arrive in Tenerife.

It has recently become possible to pay by bank card on all bus routes. Payment can also be made via Smarthphone or Smarthwatch, for those who have linked their bank card to these devices.

However, it is only possible to use Mastercard and Visa cards that do not require to enter PIN code.

There is a self-service machine with ticket sales at the airports of Tenerife South and Tenerife North. TITSA employees are often present during the day to help passengers on their way with information about the bus card, bus numbers, etc. Excellent service!

Luggage, prams & bicycles on the bus

The buses on longer routes - such as the airport buses - have a separate luggage in the lower part of the bus. The lid opens automatically and you have to store the luggage yourself.

I myself have never had a bad experience with this system, but I still recommend removing valuables (wallet, passport) from the luggage and taking it on the bus. Better safe than sorry, right?

In buses without luggage space, it is allowed to take luggage, but other than that, only folding bicycles are allowed. Both luggage and folded bicycle have to be placed in the wheelchair/pram area of the bus. Any passengers in a wheelchair will have priority. For safety, the bicycle must be fastened with the available seat belts during the trip.

Exploring the island by public transport

This may all sound like 'Bus Driving for Dummies', but from my own experience I know that for some people it is sometimes quite a victory to travel abroad by public transport. When I travel to an unknown destination, I feel much more comfortable when I know upfront how the local transport works. It can turn a perhaps somewhat stressful experience into a pleasant outing. Plus it's a nice and affordable way to explore the island.

Good news: there is now a connecting bus between the highlights of the Parque Nacional del Teide. Stops are made at Portillo Bajo, the Visitor Center, Portillo Alto, Minas de San José, Montaña Blanca, the cable car and the Parador (Roques de García).

Tickets can be paid in cash, with the Ten+ card, with a credit card (see 'Other payment methods' above) or with a Ten+ tourist card of 1 or 7 days. The exact routes and timetables of the lines can be consulted on the website. 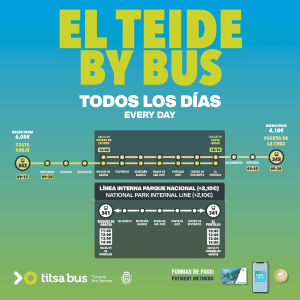 Most buses on the short routes have a convenient system for wheelchairs to enter and exit. Unfortunately, the buses on the long routes (such as bus 111, which connects Costa Adeje with the capital Santa Cruz de Tenerife) do not have this option. More detailed information can be found on the TITSA website.

When you are at a bus stop and the bus is approaching, it is customary to give the driver a hand signal that you intend to get on.

And, of course just as important: when you approach the bus stop where you want to get off, press the Stop button in good time.

Due to the Covid-19 situation, wearing a mouth cap on the bus is still mandatory, but it is allowed to pay by cash (this was prohibited for a long time due to Covid). However, it is advisable to purchase a Ten+ card, because it saves a lot of time when boarding.

Would you rather not take the bus? Take a look at my Transport page, with tips for alternative means of transport ( click here).

This website uses cookies to give you the most relevant experience by remembering your preferences and repeat visits. By clicking “Accept All”, you consent to the use of ALL the cookies. However, you may visit "Cookie Settings" to provide a controlled consent.
Cookie SettingsAccept All Reject All
Manage consent

This website uses cookies to improve your experience while you navigate through the website. Out of these, the cookies that are categorized as necessary are stored on your browser as they are essential for the working of basic functionalities of the website. We also use third-party cookies that help us analyze and understand how you use this website. These cookies will be stored in your browser only with your consent. You also have the option to opt-out of these cookies. But opting out of some of these cookies may affect your browsing experience.
Necessary Altijd ingeschakeld
Necessary cookies are absolutely essential for the website to function properly. These cookies ensure basic functionalities and security features of the website, anonymously.
Functional
Functional cookies help to perform certain functionalities like sharing the content of the website on social media platforms, collect feedbacks, and other third-party features.
Performance
Performance cookies are used to understand and analyze the key performance indexes of the website which helps in delivering a better user experience for the visitors.
Analytics
Analytical cookies are used to understand how visitors interact with the website. These cookies help provide information on metrics the number of visitors, bounce rate, traffic source, etc.
Advertisement
Advertisement cookies are used to provide visitors with relevant ads and marketing campaigns. These cookies track visitors across websites and collect information to provide customized ads.
Others
Other uncategorized cookies are those that are being analyzed and have not been classified into a category as yet.
OPSLAAN & ACCEPTEREN
Aangedreven door